This post is gonna dent my ego... Who the hell likes to admit silly mistakes?

Well, at least it was all sooo obvious you could even laugh about it!

You should laugh about it! I try to...

To keep you from making the same mistakes I wrote down an illustrious collection of my most absurd sewing fails.

Hopefully, you will think of this post so anything won´t happen to you.

In earnest... i can´t deny this. And to top it of: it happend not only once, but twice.

And in one occasion waist darts were involved... Yes, the ones that you can find in the middle of tops. I don´t know what I was thinking, if I was thinking at all.

Normally, it happens when you´re cutting a pattern piece, cut around one corner and Bingo... that was the dart. The picture above is an accident like this, it happend to my husbands cousin in this case.

But to sit down and cut holes in the middle of a pattern piece is just... not a sign of expressive destinctiveness.

To keep it short, it was just a really ugly muslin I made, fortunately. I attached strips of fabric to the dart and sewed around the edges with zig zag stitchings. This way, I was able to sew the darts at last...

it wasn´t my brightest hour...

Ok, this is something that can work sometimes, actually.

But generally, you should stick to the fabric recommendations given in the pattern instructions by the patternmaker.

The best example may be the slim fitting T-shirt that should´ve been made of jersey. But someone decided to make it out of woven fabric.

The result will be a non-stretchable, much too small, unwearable top... that will never be worn, that sucks.

That didn´t happen to me, actually! I mean the T-shirt case.

Sure, I used other fabrics before that weren´t recommended, but I was able to save it at last. I vividly remember some trousers. The pattern said stretch fabrics only. I used a non-stretchable woven one. It was rather tight fitting, but manageable. Phew!

Add width to only one seamline

Just another bright hour of my beginning career as a tailor. By now, I see it as a rookies mistake with a bad math allergy, as it showd me something. or rather, two things.

But everything in turn now. I wanted to go to my prom with a selfmade dress. A pattern was bought, I made a muslin, bought fabric; one of the fabrics I even printed a pattern on! There was no way I was seen without leopard print these days!

Well, everything went just fine, but, I don´t know why, I had the fantastic idea to increase the width of the skirt to get a more flouncy look.

So, there should be more width at the hemline, I thought. No sooner said than done. But, I added the whole width I planned on adding at the centre back, 10cm each side.

And as usual, it´s totally not necessary to be ahead of time... So, it arised that I finished my creation one afternoon before the big night and tried it on with vigor.

It was everything alright in the front. But what is that??? It looks like a ducks butt at the centre back! The whole last-minute width I added cascaded over my butt, not all around the hemline as I wished it had. Who could have told...

My mother and me were clueless, but agreed that I couldn´t go out like that. She called a friend which is a seamstress, coincidentally. She explained to me I had to remove the additional width and that you can´t just go and add the complete width randomly to only one area (at least if you want it to spread around evenly throughout the whole hemline).

I did just that and everything was fine. Uh, at least I could cut it off! Adding would´ve been rather tricky...

Oh, the second learning effect I promised you, which went out of the window afterwards, unfortunately... Don´t finish at the last minute!

We all were there...

I don´t want to copy all these lines, it has to do without.

Just to measure around thhe pattern frantically, when you need this one mark. Mostly, it becomes sloppy because the garment is halfway finished and can´t lay flat anymore for measuring correctly.

Just do yourslef a favour and mark the important stuff. And maybe even the not so important ones. Maybe you have to use them later. Than, you will be happy you did that.

In this post I explain again why I think marking is one of the ultimate sewing tips.

Actually, I only have one thing to say about this:

Don´t kid yourself! Measure thoroughly and accept these measurements as they are.

it´s of no use if you cheat while measuring or skip it altogether because "36 always fits".

I cut a dress once. The measurements on the envelope of the pattern weren´t matching to mine exactly but I thought the ease was going to manage this. So, in conclusion, i thought it will be just a bit tighter. No, it wasn´t like that. I didn´t even managed to close the dress. Annoying, next.

Sometimes it isn´t as easy as it seems, I know. I was kinda dejected when the tape measured 2cm less at the bust after two pregnancies.

But I simply marked the new measurement down in my personal table. I would´ve been grumpier if my tailored garments didn´t fit because of my ego and some numbers.

Our sizes were defined by someone at some time. They even vary from time to time and from label to label.

They exist in my patterns, of course. As they should help with choosing the correct size. You shouldn´t skip the look in the measurements table though!

Always, always i forget to buy this freaking matching thread.

Mostly, I will find a similar one in my stash or simply sew with the holy trinity of evergreen thread colours: grey, beige or bordeaux.

Well, it´s quite handy that most of my garments are black anyway. So black it is, then.

When I started to sew for the kids I had to deal with colours like berry, petrol or mustard. Well, meanwhile i have these colours in stock too. But actually, only one spool of thread at the most just for visible seams.

Not be bothered with seam ripping

I preach time-consuming things, I know.

Seam ripping is not exactly fun. Especially with serger or coverlock seams. You can even end up with a hole in your fabric...

But since my apprenticeship as a tailor, seam ripping is an essential part of sewing if the seam isn´t in a satisfying condition. Especially if the seam is visible! How does that even look? My instructor simply said just one word in these cases:

And she was damn right with it. Do yourself a favour and rip that seam if it bothers you. Immediately, not at the end when it´s too late.

I hope I could entertain you or lift you up with this list of cruelties. Most of these things happen only once - or twice... What monstrosity happened to you? And, are you seam ripping already or not? 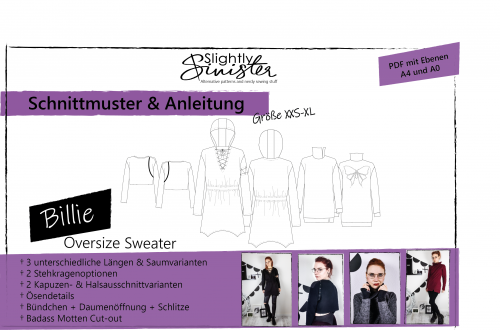 This is… Billie – Der Allround-Sweater

5 fundamental sewing tips from a tailor 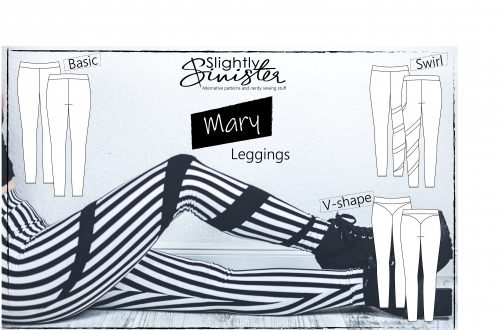 This is... Mary! The twisted leggings 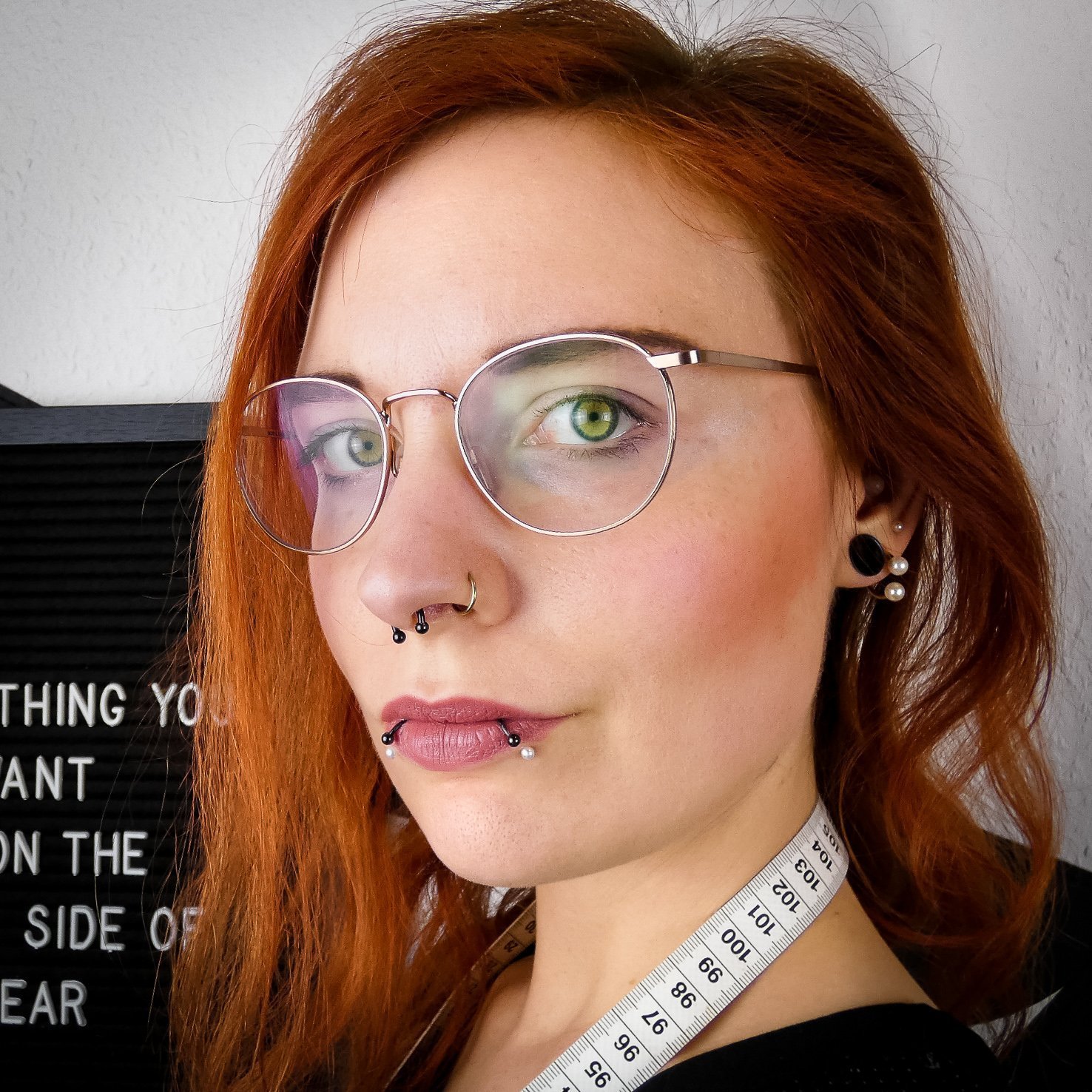 I´m Sonja. As a tailor and fashion designer with a disposedness to Punk and Gothic well-fitted and adequate clothing are my passion. And you can sew these clothes yourself! I like to show you that it isn´t very difficult to achieve unique stuff with a bit of fabric, patience and a sewing machine.